A sunny winters day in Canberra. So I took Juno for a loloping walk along the banks of lake Burley Griffin.

It was one of those days, that lifts your seasonally affected spirits and promises a way-too-early hint of spring that you just know will be snatched back by the icy winter as soon as you dare warm to it.

But in the moment, as we meandered along, there was a cloudless blue sky, the smell of pine, and a windless quiet that seemed to clarify the gentlest of sounds skipping from the far side of the lake.
A wood duck pushing forwards into the rushes. The plop-splash of a carp jumping.
And even further back, the unintelligible yet clearly identifiable calls of kids playing.

We were following the track of a bike path that hugged the shore mostly.
The lake itself is always a muddy brown/grey. Constant wind turbidity forever preventing photosynthetic stabilisation or any settling of its sediment. Even so, today it was doing its best impression of a sky-blue mirror.

Lake Burley Griffin is an artificial lake occupying some 664 hectares of flood plain of the Molonglo river. The lake is around 9 kilometres from end to end. Form above it looks like a constipated transverse colon pinched off on one end by Scrivener dam. With its inkblot edges spreading out, it provides 40 kilometres of actual foreshore to investigate.

It has parks and barbecues and bike paths and a balance of quiet spaces and city amenities.

A little further along the path straightened out to offer a clear view across to the rocket ship Telstra tower sitting atop Black Mountain.

Juno is transfixed by a group of Black Swans just off shore. He puffs himself up and throws out his best pit-bull stance, until the swans turn and glide towards him honking his bluff. In an instant he is a small white fluffy puppy that needs to go and check something behind my legs. 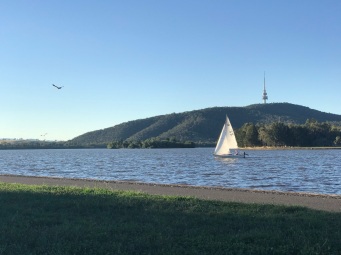 The 195 metre, telecommunications tower was built in 1980 at the cost of $A16.3 million dollars. I remember the controversy back when it was being built. Many people protested that it was going to be a permanent eye-sore.
Turns out it looks pretty cool…at least to me.
It has multiple viewing platforms for the tourists and a restaurant and it looks like at any moment is is going to engage main engines and lift off for Tattooine.

We walk on a ways and then stop for a moment so Juno can sniff about and lift his leg against a few particularly interesting aroma points. Looking out I can see the shrubby humps of Springbank and Spinnaker islands. I can never remember which one is which.

I do remember one year, way back when I was a kid, we got this small inflatable boat for Christmas. It had a squeaky, whistling, plastic foot pump that took about 6 days to inflate it with. It had blue racing stripes. It even had an aluminium frame supporting a fringed floral Bimini to provide shade. It was awesome.

That very day, loading up with provisions the entire family squished on board and dad rowed us across to one of these islands to hunt for yabbies and have a picnic.

The wind rolled in a gale whist we were there and after aborting our lunch it required a Herculean effort by dad to actually get us back to shore. The boat sat low in the water which was now angrily chopping and frothing over its edges. Flimsy plastic oars bent ominously under the heave and the ho. The floral shade cloth was a counter-assisting spinnaker.
Someone was a little scared.
I seem to remember bad words being uttered by my parents. Very bad words.
This was no longer a lake, this was an ocean.

I thought we were going to get blown over the dam for sure.