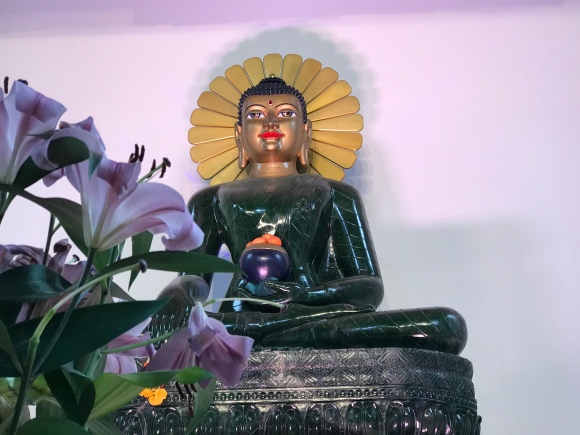 Today we went to visit the Great Stupa of Universal Compassion just outside of Bendigo.

A stupa is a sacred building symbolising the enlightened mind and the path to enlightenment in Buddhism.

This particular stupa is a massive structure with each side if its square base measuring 50 metre and tapers to a crown some 50 metres high.

It is roughly 2 years away from completion but you can still get a pretty good idea at this stage how it will look. The cost of the building is estimated to be around 20 million dollars raised largely from international donations. That cost does not include the artworks and valuable items that will be placed inside.

The top third of the stupa is currently being constructed beside its base. The lady showing us around informed us that they cannot find a crane big enough to lift it into place yet. “Perhaps a helicopter will be used” she suggested.

Looking at the structure I thought to myself, I definitely dont want to be around to watch a helicopter try to lift that….up onto THAT.
But Im sure the engineers have it all worked out.

In fact the whole building has been purposefully over-engineered with the intention that it be able to last at least 1,000 years. And after taking a look around the construction areas I can advise you that should the apocalypse arrive this stupa would be a pretty safe place to ride it out.

Inside the stupa is a recently installed 4 tonne Jade Buddha. It has been carved from a single stone of jade (known as the ‘polar pride’) that was discovered in Canada in 2000. It is considered to be priceless.

Well that was all pretty impressive. But there was more. A short distance up a paved pathway that wound through stands of Chinese Elms, Manchurian Pear and Crepe Myrtle was a little Tibetan monastery with carefully manicured gardens and sculptures.

Kelly was particularly captivated by the prayer wheels. Cylinders inscribed with the mantra ‘Om mane Padme Hum’ that are said to bring good fortune on turning them and thereby sending the mantra out into the universe. Kelly set out on a mission to spin every prayer wheel in sight. And there were a LOT of them.

The peace park that surrounds the property is dedicated to interfaith dialogue. There have been artwork donations made to the garden by Sikh, Islamic, Catholic, Hindu and Aboriginal communities. 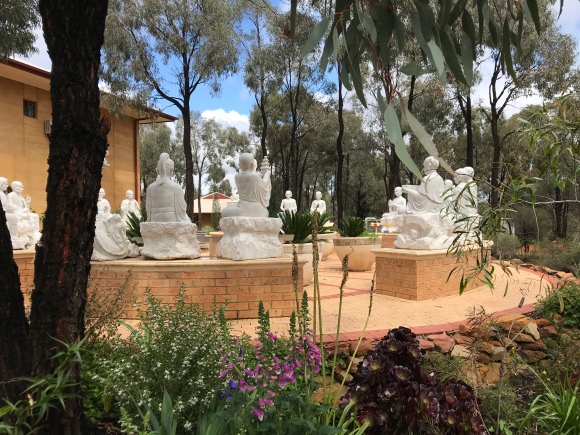 Yes, it was a very peaceful morning looking around the stupa and grounds. Juno was also welcomed as a fellow sentient being throughout the grounds. He could even go up and sniff the Jade Buddha.

The three of us give it an ABSOLUTE must see if you are ever in the area.